S’i fosse foco, the famous poem by Cecco Angiolieri, explicitly ridicules the literary topics of the Italian ‘Stilnovo’: instead of adopting the usual amorous subjects of contemporary poetry, the poem is a violent attack on the social conventions of his time, calling for a complete subversion of the worldly ethical dimension.

The dialogue between female voice and digital sound attempts to represent this paradox of the imagination: in the first part, the literary text is whispered, spoken, stammered: it is the semantic autonomy of the signifier to construct a meaning, whilst the signified is perceptively hidden, as an echo. Finally, in the third part, the intensity of entropy decreases and the ‘song of the chaos’ emerges: the voice try to reach her extreme ranges, the rhythm is slowed, the vital flow seems suspended in a hypnotic game which represents the visceral acceptance of the ontological necessity for disorder. 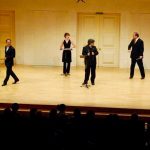 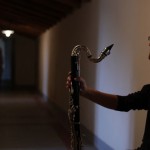